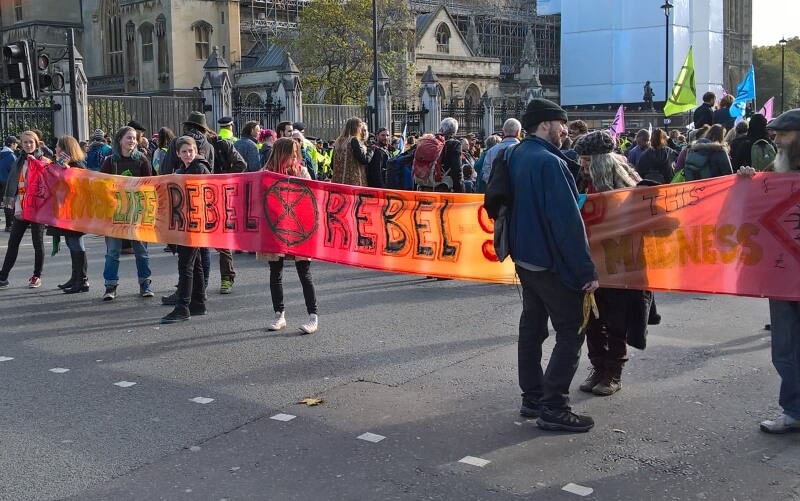 The Extinction Rebellion outside Parliament at the end of October

In the run-up to COP24 there were a flood of climate reports all with variations on: “It’s worse than we thought but we can avoid catastrophe. Action this Day!”

As COP24 grinds to an end it seems clear that it will again have avoided agreeing effective action. Indeed, it may signal a reverse as the Axis of Climate Evil (Kuwait, USA, Russia and Saudi Arabia) refused to let the COP even ‘welcome’ the IPCC Special Report on 1.5 degrees.

As Prof. Kevin Anderson said at COP, “We scientists have been saying the same things for 28 years and over that time emissions have risen 65 per cent”. It time to do something different.

Green MP Caroline Lucas at the Extinction Rebellion eventAnd we are. That thing is the eXtinction Rebellion (XR). The Rebellion recognises that our electioneering, marching, lobbying and letter-writing have failed. The Rebellion has adopted a strategy of non-violent direct action – the method of Gandhi and Martin Luther King. Rebels have blocked Parliament Square and London bridges leading to scores of arrests. Leading Greens like Caroline Lucas, Molly Scott-Cato and Rupert Read, and even a few members of Enfield Green Party!, have taken part in these actions.

The Rebellion does not have formal support from our party though that’s under discussion.

The Rebellion is not perfect. Its demand for the UK to go carbon neutral by 2025 is unachievable and its proposal that a randomly chosen Citizens Assembly makes policy ... well let's say it needs more thought.

But the true importance of XR lies or will lie in its ability to mobilise people, to draw public attention to climate change and to force governments to pay more attention. The list of events on the website suggests that it’s beginning to work.

That’s good. We need this to work.