Enfield streets: For people, not cars

For years, residents all over Enfield have suffered from noise, congestion and air pollution due to too much through traffic. Enfield Green Party believes that streets are for people, not traffic. The space has to be shared but on residential streets residents should come first. Across Enfield, we are campaigning for measures which cut traffic, reduce air pollution, and which make our streets safer, cleaner and greener. We support the use of innovative traffic calming measures, which stop streets becoming ‘rat runs’. We favour low speed limits… 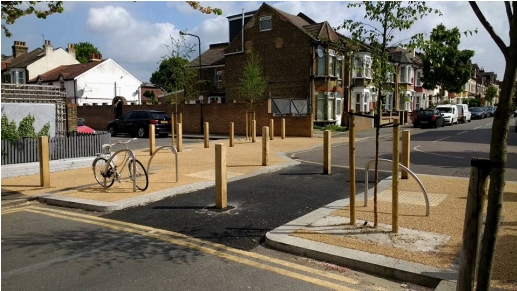 Enfield Greens support new traffic reducing measures like those used in the borough of Waltham Forest, above (Photo  Paul Gasson)

We are campaigning for Western Bowes to become a Low Traffic Neighbourhood. New road features would allow cyclists and pedestrians, but not cars and other motor vehicles, to pass through these residential streets. This approach has been used very successfully in the London Borough of Waltham Forest, where it has civilised the streets and reduced total traffic.

Vote for Enfield Green Party in the May local elections and we will continue to campaign for the establishment of more liveable streets for all of Enfield. The measures we propose would benefit the whole of Enfield, setting an example of a transport policy that puts people first.